NEC is the second chapel planted by Kitwe chapel after Riverside chapel- almost 10 years apart
Efforts to plant a church in this area date back to the early 1990s- Mpelembe, Nkana Trust and Riverain Primary School in Nkana East.
In March 1994 two events happened at Kitwe Chapel:

Task force to formulate modalities of introducing two morning services tabled their recommendations to elders. Elders resolved that a new work in Nkana East be launched.

Permission to use Riverain was granted- late Mrs Makupe was head teacher.
June was set for the launch, but due to logistics 14 August 1994 was the date that was settled for.
The double classrooms were worked on, wooden floor, walls painted, windows and doors secured, toilets and lighting were done.
Chairs were brought in for pupils’ and church on Sundays.

FROM RIVERAIN TO THE PLOT

In June 1997 a short-lived ban was issued for churches not to use schools for worship.
This decision helped the church to move to the plot within a week- a shelter using ZAFFICO was constructed and 2 pit latrines were dug (though the  School Administration wanted NEC to stay on as it had added value). But the leadership felt it was time to leave even without a structure.
In May 1998 Sunday services shifted to the main sanctuary in readiness for Evangel 98 with B Haig (roof was done but with no walls- reed mats were used). 21st Street was not as busy – it would have been difficult.

Hard working building committee- H Rea, M Daka, R Titima, J Bwalya, V Shaba, W Chirwa, B Dioma, R Kamanga, T Mtonga. There were also three other committees formed in 1996- Land Scaping, Recreation and Fundraising. These too worked very hard.
Availability of human resources from all the chapels
Financial resources from within and outside the chapels
Donations of materials and diverse practical help- MMM, Musenga Mission, Techpro, ZCCM Nkana Mine (now Mopani Mine), Power Division (now Copperbelt Energy), etc.
Timely conversion of H Mwenechanya and his availability to the building project.
Purchase of Manse within three months of offer.
Regular conversions of souls and numerous joint baptism services with Ndeke Village chapel (some as couples)
Team work  by all members.  Everyday the majority of members passed through the plot. Saturdays believers came in large numbers to be part of the work. Ladies rose to the challenge and provided energy giving food for the Men at work.

May 1998 Sunday services shifted from the temporary shelter to main sanctuary in readiness for Evangel 98 with Barry Haig- June; The steel roof structure had been lifted in January that year.
Roofing and rough floor was done, but no walls had been constructed yet. Reed mats were used (traffic was not as it is today).

September 2000 the building was officially dedicated- John Symons was special guest. Major works had been done except for the floor, ceiling, and painting of walls. It was a great day as many people from other churches joined NEC in giving thanks to God. Chairs were hired for the occasion as the benches had not yet been bought.

The Lord has dealt with NEC graciously in the last 21 years (as of 2016). We can look back with gratitude to God who has
Protected the church from  heresies and schisms.
Supplied  the church with every need over the years- benches, manse, 3 church vehicles in the last 12 years, ceiling (and the right man to fix- Paul Haney)
Given the church workers who have played their role in looking after the church- Timothy Lundu (worked closely with H Mwenechanya), Frank Mumba and currently the Chansas. 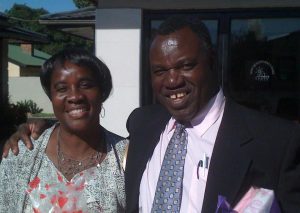 We are found in Nkana East,
Corner of 21st Avenue and Muombo Street,
Kitwe, Zambia.